Warning: count(): Parameter must be an array or an object that implements Countable in /home/honest46/public_html/wp-includes/post-template.php on line 284

The England Coast to Coast – Hike with Me Please 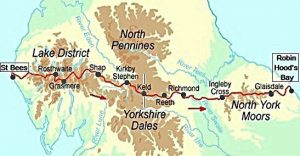 Come forth into the light of things,

Let nature be your teacher.

Simply, the Wainwright Coast-to-Coast walk across northern England is one of life’s very best experiences outdoors with nature, history and great people.  Do it while you can!  Along the way I tried to capture what such a thing is; the only real answer, the answer that compels the understanding of it, is to experience it.  It takes all five senses, perhaps a sixth, to ‘see’ such a trip and fathom why it is arguably the second most popular hike in the world (The Milford Trek in New Zealand is purported to be the first).  Gadzooks, the C2C is where the English poets got their inspiration, where the Normans and Anglo-Saxons warred, where the Romans patrolled their Northern Empire along Hadrian ’s Wall which still stands.  Along the C2C you will find some of the most spectacular chocolate covered orange rind anywhere.  World class chocolate is another way is to suggest that hikingis one of life’s many ways that anyone can feel quite alive.

Imagine deep, deep breathing fully oxygenated air for about 8 hours a day; there is a sensation of slightly floating over the trails once snow covered, once brilliant yellow with gorse and rapeseed and once purple with miles of heather on the moors.  Then one comes into a picturesque village of stone houses, lichen painted stone fences, flowers in just the right places and legendary English hospitality, conversation, manners and courtesy.  It is tough to imagine one must see it, smell it, feel it, hear it and taste it (the food is fabulous).  In fact, the English poets, not the least of whom was Wordsworth, tried to capture what we saw and became famous in only the attempt of it.  What they were trying to communicate was an invitation to an experience, for this hiker, it is life-changing.

A good point of departure is the itinerary we planned and took with us.  We traveled to St. Bees in May to follow this suggested 12 day itinerary of about 192 miles which was much more due to ‘hiking’ around towns and villages, This is the tale of three fellows following in the footsteps of conquerors, poets and Bilbo Baggins.  This multi-parted journal relates what is possible with just a little planning, determination and a reasonably good book on the topic.  But first we had to do a little planning which is the next installment.